Donut is a special boy who needs some special care.  A friendly small-sized guy, he originally came to AAGA in May of 2018 following a very successful racing career:  172 races “in the money” 60% of the time plus 7.0 performance points. Following adoption he developed the auto immune disorder known as SLO which causes the dog to spontaneously lose his toenails. As a result of the pain, Donut became quite irritable, unmanageable, and even aggressive until, finally, his adopters tearfully returned him to AAGA. Now under proper treatment, Donut has experienced remarkable improvement, and his toenails are beginning to re-grow. Whether the condition will ultimately resolve itself, or if it will require that he be maintained on medication for the rest of his life, is unknown at this point.  But at least he is now returning to his former happy, friendly self and can look forward to a good quality of life. 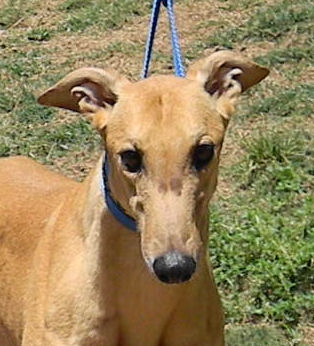