History of the Breed 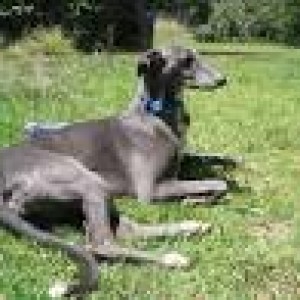 o begin with, the origin of the word Greyhound is very obscure. Some say it is from the old English word grehundr, meaning “dog hunter.” Others feel it could be derived from the Saxon words Grech or Greg, meaning “Greek” as it was felt the breed originated in Greece. Other theories suggest it is a corruption of terms such as gazehound, which describes a dog that hunts by sight, Greek Hound, Great Hound, or even Gradus, the Latin word for grade or degree, implying that Greyhounds are top grade. In any event, it does NOT refer to the color of the dog. In fact, gray Greyhounds are quite rare. At one time it was felt that “gray” – or “blue” (as the color is referred to) – Greyhounds were poor racers and prone to behavioral problems, so the color was almost virtually bred out.

Greyhound-type dogs are the oldest recorded in history. The breed originated some 8000 years ago in the ancient civilizations of the Middle East where hunting dogs with deep chests, delicate heads, and long legs were found depicted on the walls of early cave dwellings. They have been the subjects of art and literature ever since.

In Ancient Egypt Greyhounds were revered as gods and could only be owned by royalty. The death of a Greyhound was mourned only second to the death of a son. To kill a Greyhound was to be condemned to death. Greyhounds were mummified and buried along with their owners, and the interiors of pyramids were decorated with their images. Most of Egypt’s famous pharaohs and leaders, including Tutankhamen and Cleopatra, kept Greyhounds.

The Ancient Greeks were fortunate to bring back a few Greyhounds from their travels to Egypt. Here, too, in Greece they were held in high regard, depicted often in art and literature, and limited to ownership by nobility.  Alexander the Great was always accompanied by dogs in his battles, and his favorite was the Greyhound, Peritas. It was here that the sport of coursing, i.e., two Greyhounds set loose to chase a hare, became a favorite pastime.

But it was the Romans in the spread of their empire that brought the Greyhounds to Britain and Ireland where they became popular as hunting and coursing dogs. During the famine and pestilence of the Middle Ages, the Greyhound would have become extinct if it were not for the clergymen who protected them from starvation and bred them for noblemen. It is believed that the first Greyhounds came to North America with Christopher Columbus.

Back in England, in the Tudor times, coursing grew to become a competitive sport. Because of its popularity, every effort was made to improve the breed. In the late 1700s the eccentric Earl of Orford became obsessed with breeding the perfect Greyhound and experimented with a number of crossings with other breeds, ending with his now famous Greyhound-Bulldog breedings. (The Bulldogs of those times did not look like the Bulldogs of today.) The resulting dogs were of exceptionally high quality, became much in demand, and are the basis for today’s Greyhound.

As Europeans immigrated to the United States, they brought their Greyhounds with them. The Midwest, with its open prairies overrun with jackrabbits, became the ideal place for Greyhounds, for Greyhound coursing, and, ultimately, for Greyhound racing. General Custer, the day before his fatal battle at Little Big Horn, coursed his 14 Greyhounds. Fortunately for them, he then sent them off into town, thereby saving them from the fate that was to befall him the next day.

The real birth of Greyhound racing as we know it today resulted from Owen Patrick Smith’s invention of the artificial lure in the early 1900s. This eliminated the need to kill live rabbits and allowed Greyhounds to race on an oval track in view of a bigger audience. Over the years Greyhound racing grew, reaching its peak in 1991 when it was the sixth most popular spectator sport. Since that time, casino gambling has cut into its popularity. Here in the States that, along with negative publicity regarding the industry, caused revenues to decrease and tracks to close. In 2001 there were 50 Greyhound tracks in 15 states. In 2015 there were just 21 tracks operating in 7 states – Alabama, Arizona, Arkansas, Florida, Iowa, Texas and West Virginia. 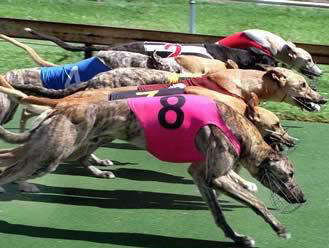 Until 2020 Florida, with its 12 tracks, remained the seat of the industry and the major source of adoptable ex-racers. Then Constitutional Amendment 13 was passed in that state, effectively banning Greyhound racing and forcing the closure of all 12 tracks.  Efforts are now being made in other states to do the same. If the current trend continues, one wonders what will become of the Greyhound breed as we know it once the last U.S. track closes. Since there are very few sources of Greyhounds outside the racing industry, we will have no choice but to turn to those countries where the sport continues to flourish.

The Greyhound in Art and Literature